When we hear the word “tzedakah,” many of us think of the word “charity,” or recall placing our parents’ pocket change in jangling boxes (known as a pushke in Yiddish)  in Hebrew school or at synagogue.

In fact, the word tzedakah is translated as “justice.” Maimonides lists eight levels of tzedakah — the highest level is to empower the individual, by offering a loan; assisting people with finding employment; or helping people establish businesses. While giving charity to the poor through donations is noble, and makes Maimonides’ list in several forms, it often chains the needy to a system of relying upon external groups to sustain themselves. This is generous, but not necessarily just — empowering individuals to sustain themselves is the highest degree of Maimonides’ concept of tzedakah.

At Shoresh, everything we grow is donated — the Kavanah Garden produces over 500 pounds of fresh vegetables annually for distribution in the community. We have always donated our harvest to tzedakah including organizations such as Ve’Ahavata,  Jewish Family & Child  (JF&CS) and Chasdei Kaduri.

In 2014, we adopted a new approach to tzedakah and what unravelled was the launch of Maxie’s Garden — a story that begins in Kensington Market.

Dave Pinkus has lived on Nassau Street since 1927.

At the close of the 1920s, Toronto was home to a burgeoning population of Jewish immigrants, highly concentrated in the Kensington neighbourhood. Just a few years later, vendors had set up food and goods, lining the street in what came to be known as the Jewish market. It closed on Friday nights each week as the bustling crowds would disappear into their homes to observe the Sabbath, coming to life once again on Saturday nights and flooding the streets with members of the surrounding immigrant community doing their shopping throughout the week.

Today, we know this area of Toronto as Kensington Market. The majority of the Jewish population that once enlivened its storefronts and alleyways moved north — but not Pinkus. 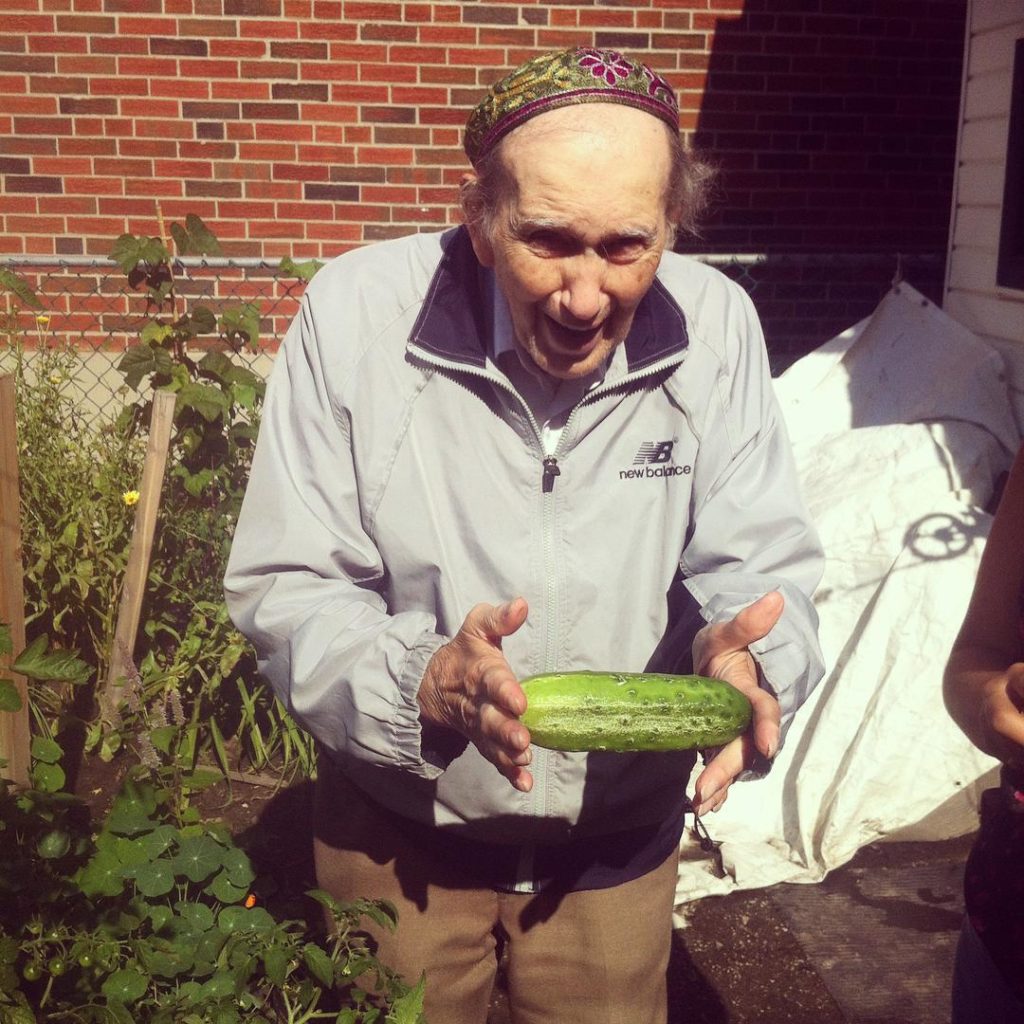 The same year that he came to the neighbourhood, the Kiever Synagogue was established at 25 Bellevue Avenue. His parents were founding members of the shul that remains in its original location to this day. The Kiever remains active today, and Pinkus serves as its president.

In 2014, Shoresh began to set roots in downtown Toronto and were looking to start a new community garden in the area.  Through a variety of connections, Pinkus heard about Shoresh’s interest and generously offered up the backyard of his 90-year-old Nassau Street residence. The project was called Maxie’s Garden, after Pinkus’ late brother.

For 23 weeks, 5-10 clients of JF&CS came to the garden to learn how to tend to the land, guided by Shoresh Director of Community Engagement, Sabrina Malach from seed to harvest. The group was called “Back to Our Roots.”

In the shadow of the vibrant Jewish market of nearly a century ago, coloured by the produce of downtown vendors, the group grew fresh produce in Kensington to take home and to donate to the community. In the rich soil, invested in several years earlier by Pinkus, the group grew carrots, beets, radishes, herbs, lettuce, tomatoes, cucumbers, chard, chives, zucchini, beans, garlic, flowers, and more.

Pinkus, an incredible community leader and a living library of the history of Toronto’s Jewish community, engaged with the group throughout the program.

“I really enjoyed myself both for the learning factor but also in having the true privilege of meeting David and getting to know him somewhat and in marvelling and also being amazed at his vast knowledge and memory,” one participant described, “What a true mensch and wonderful, wonderful man. I loved hearing him speak of my uncle and family that he knew. It is very rare to be in the company of such a gifted and kind man who possesses such a razor sharp memory and accurate too.”

Several participants found the experience of working in the garden healing, and many expressed that they enjoyed the collaborative, social nature of the work. “I love the garden more every time I come,” said one participant, “I find it therapeutic and it makes me feel proud.”

“After learning from Maxie’s Garden, I planted my own garden,” said one participant of the JF&CS-Shoresh collaboration.

Describing the highlights of her experience in the program, another participant describes, “taking home the harvest, [having] access to organic food, [and] knowing that I was a contributing hand.”

Since 2014, Shoresh and JF&CS have grown the program to include cooking workshops and lessons in pickling, herbal medicine and pollinator conservation.

Tzedakah is not the only Hebrew concept that is sometimes mistranslated — we often think of “mitzvah” as meaning “good deed,” but in fact, it means “obligation.” Tzedakah is a mitzvah — and social justice, more than a commendable endeavour, is an obligation upon the Jewish community.

At Maxie’s Garden, the Maimonidean principle of the highest degree of tzedakah as social justice is seen in action — participants learn to plant, weed, and harvest their yield, so that they can nourish themselves independently. Beyond this, they also have the opportunity to socialize; to meaningfully work with and learn from others; and to engage in the ineffable healing and empowerment of gardening.

As one participant noted, “the process of seed to the table is truly divine.”