For over ten years, Shoresh has been debating if 21st century meat is “fit” to eat according to both Jewish and environmental ethics. We have been seeking food choices that are aligned with our Jewish values; food choices that express the highest standard of care for the animals we eat, the earth, and the workers who help bring food from farm to table.

This conversation started at the Hazon Food Conference in 2007 and then we brought it to Toronto at the Shoresh Food Conference from 2012-2014 with our tagline being “Kosher? Local?  Organic? Oy vei!” The tagline represented the connundrum that we coudn’t find products and specifically, meat, that checked all of these ethical boxes.

We are excited to continue this conversation, and move forward in our exploration of what it means to eat “Jewishly” in contemporary times at our upcoming event, Eating Jewishly: A Farm to Table Chicken Dinner and Discussion! We hope you will join us for a gourmet, kosher, organic meal featuring locally-raised, heritage chickens carefully prepared under kosher supervision.

For now, take a deep dive into chicken breeds and read on to better understand why heritage chickens are a critical feature in trying to source meat that is fit to eat according to Jewish values.

For the past several hundred years, poultry farmers have been breeding chickens for faster growth, egg-laying ability, conformity, plumage, and docility. Modern chickens look drastically different from their wild ancestors who were first domesticated nearly 10,000 years ago. 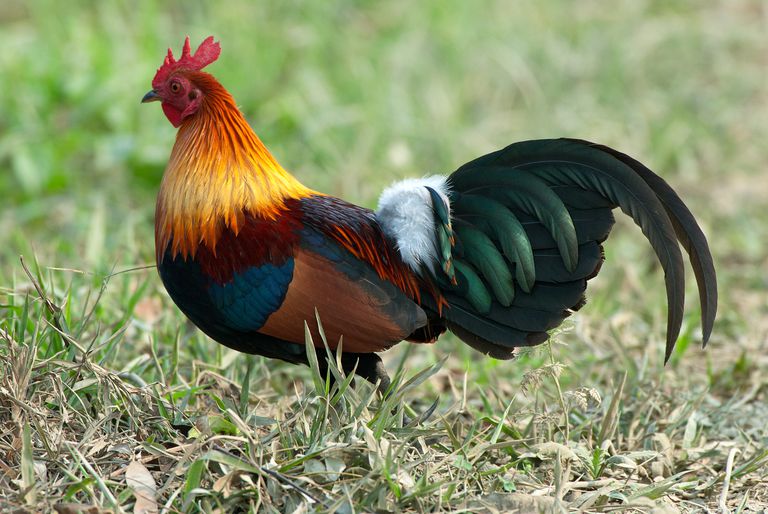 Up until the mid-20th century, the standard North American chicken was one of a variety of heritage breeds, living in small flocks, who mated naturally and had long and productive lives. In the 1950s, a new hybrid chicken breed emerged and is now the industry standard. These commercial chickens are bred to grow fast, while requiring less feed. It now takes less than two pounds of feed to produce one pound of chicken, which is less than half the ratio it took in 1945, making chicken the cheapest, most efficient, and most convenient source of meat-based protein. These birds typically have a lifespan of 8-10 weeks.

Every year, over 50 billion chickens are raised for meat and eggs. 16 billion of these are specifically bred to be eaten, and over half of them are raised in industrialized factory farms. All of these commercially raised chickens are virtually the same breed as eachother, and the Livestock Conservancy (https://livestockconservancy.org/index.php/heritage/internal/heritage-chicken) lists over three-dozen heritage breeds that are at risk of extinction.

Chickens raised for meat are referred to as broilers and grow to 2 kg (4.4 lb) in 6 weeks or less. Since these birds grow so fast, their legs can’t support their weight, and their hearts and lungs can’t supply their muscles with enough oxygen. Broilers therefore have even higher mortality rates than laying hens, who take 18 weeks to reach 2 kg. In 2010, a team of researchers in the Netherlands found that while commercial birds are bred with a singular focus on maximum meat and egg yield, they are left with left resources for immune system function, and are more susceptible to disease. This of course, has negative consequences, not only for the birds, but also for the farmers and consumers.

The kosher chicken industry in North America tends to look similar to the contemporary commercial industry. Empire Kosher, the largest kosher chicken company in the US, produces 240,000 chickens and 27,000 turkeys each week. The chickens are fed a diet that is strictly vegetarian and Kosher for Passover all year round, and it takes around 1.8 pounds of feed to grow a pound of chicken, the same as the industry standard. Chickens raised for kosher meat are approximately 6 weeks old when they are loaded onto trucks and taken to slaughter. This process is as precise and efficient as the chickens’ short lives. A team of 12 Shochets (Kosher slaughterers) working at the Empire factory, slaughter about 70 chickens per minute.

Empire does state on their website their intention to hold themselves to a higher standard of ethics. Since kosher animals are required to not have any blemishes, birds raised for kosher meat, are not bred to be as heavy and imbalanced as other commercial birds are, so as not to damage their muscular or skeletal systems. Empire’s standards are in line with the “Magen Tzedek” seal, established by the Conservative movement, which guarantees certain ethical standards of treatment of workers, animals, and the environment. 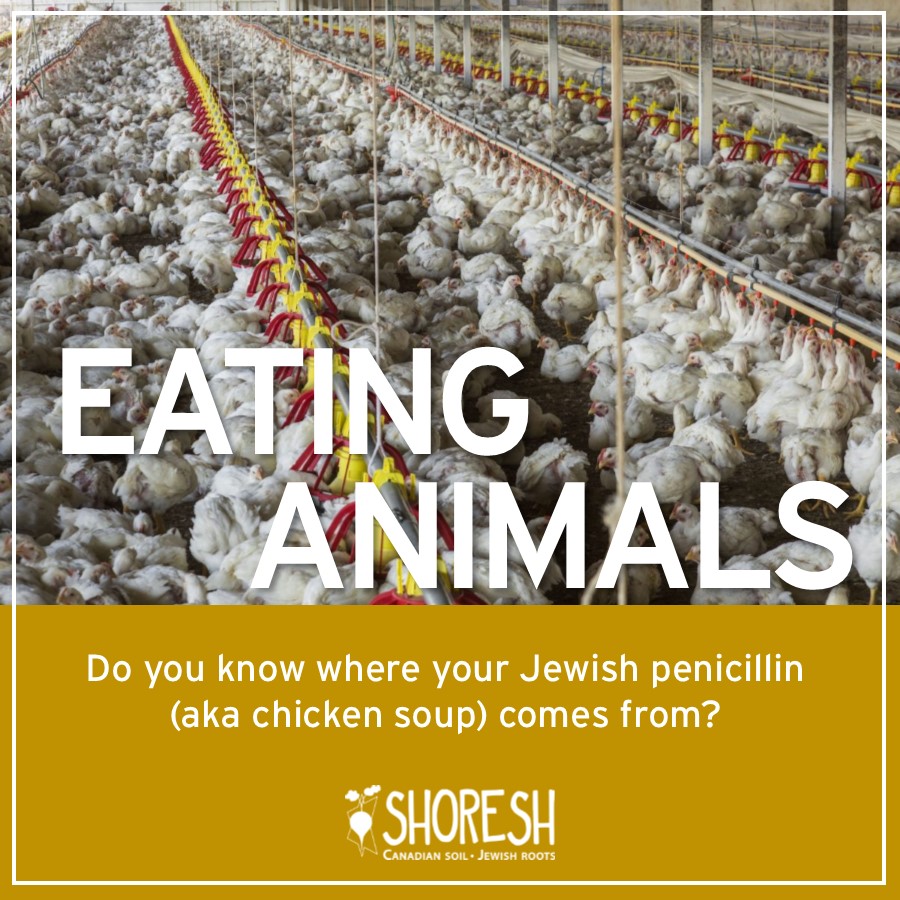 Despite the cost-efficiency and convenience of hybrid birds, many farmers have maintained or gone back to methods of raising heritage poultry breeds. Each heritage breed has unique characteristics, ensuring more diversity and hardiness within flocks. Heritage chickens are defined as birds from breeds established prior to 1950, who are slow growing, naturally mated, and live long, productive lives. Since heritage birds have slower growth, they have stronger immunity, skeletal function, and healthier organs, than their hybrid cousins. They are productive and fertile, with minimal pain and sickness, with lifespans of 3-5 years for laying hens, or 5-7 years for roosters.

The Jewish Initiative for Animals (JIFA)  calls for Jewish institutions to leverage their (our!!) buying power to bring back these more traditional breeding practices, and to support poultry farmers who are raising healthy, ethically treated heritage birds outside of the conventional factory farming systems. There are several Kosher butchers in the U.S. who raise and slaughter kosher heritage poultry, as well as other organic meats, including Grow and Behold and Kol Foods. In Canada, kosher heritage chicken is still harder to find, although Tiferet Organic, a small family business based in Montreal, does ship local and organic chicken and meat products to Montreal, Ottawa, and Toronto. Linke Fligl is a project of Jewish chicken farmers inspired by ancestral traditions and by the contemporary work of JIFA to grow healthier and more wholesome heritage chickens.

Shoresh is working hard to create opportunities for meat-eaters in our community to have options to purchase kosher meat that is also local, organic and heritage. Join us on September 12th at Eating Jewishly to hear updates and try Ontario-grown, kosher, local, heritage chicken!

Get your tickets today!